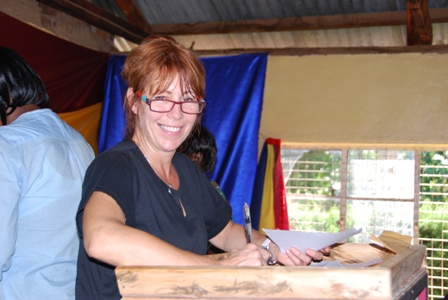 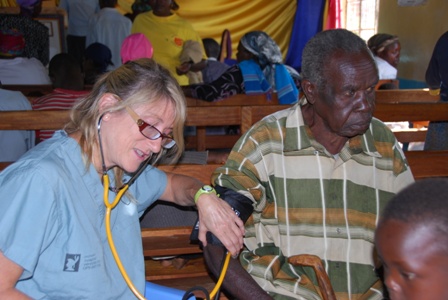 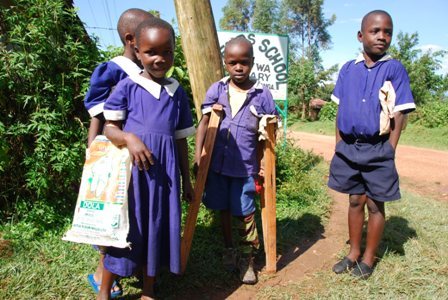 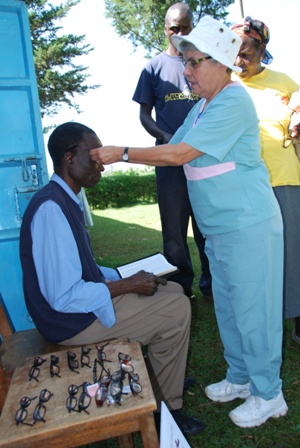 What an awesome day today.   We treated 700 patients, held a jiggers clinic, treated 11 wounds, and dewormed 2 schools.  Trish and Sylvia started their day by purchasing and delivering a new set of crutches to the older female who had a broken leg and delivering special medication needed by a patient both needs indentified during a home visit yesterday.  On our way to Wungulu, we stopped for gasoline and saw two boys, about 12 years old, searching the garbage from the gas station’s disposal bin for items they could sell.  Their clothing was black with grime and only one was wearing shoes.  One of the boys looked at us and his eyes held no expression except of hopelessness.  He then walked away.

I am often asked what Kenyan homes are like.  The homes themselves are usually two rooms, one for sleeping and one to eat in and to socialize.  The house itself is built  with a latticework of sticks, which are sealed with mud.  The home will have dirt floors.  To protect against infestation by the $3.60jiggers flea, the floors are smeared with cow dung which gives them a hard surface.  It is an activity that has to be every few weeks.  Can you imagine telling your teenager it was time to seal the floor!!!  The roof is corrugated steel. The elderly female lived in a home such as this.  The kitchen was located in the corner of the room and was a small open fire of charcoal or sticks of wood.  All the cooking is done here.  The female patient was on one of two couches, the seats of which had been reduced to the foam.  Because the roof was so rusted and worn, the rain came in through the holes, and the lady’s granddaughter covered up her grandmother with a blanket to keep her dry.

On the way home, we came across a motorcycle accident.  It appeared the bike had rear ended a matatu.

Jean and Jerri took a 7 year old boy to hospital today. His grandmother brought him to the clinic as his mother was home with her other children.  He collapsed at the registration desk as he was so ill with malaria.  As CNFA had been to the hospital the day previous with the little girl, they treated the boy more quickly, probably as they knew they would be paid.  After he was admitted, Jeri and Jean went outside to the vendors and purchased a basin, a cup and a bowl for his needs.  We also gave the child’s grandmother 300 KES for food, about $3.20.  He was started on an IV.  When they left, the grandmother hugged both of our team and said thank you, thank you. They checked on the second child, who is to be discharged tomorrow.

An adult male arrived in a wheelbarrow today pushed by two men from the community.  He received medication and his wound was dressed.  We will follow up with him as the wound should be dressed again.

One of the saddest and more common stories is the one I will tell you now.  A very thin 20+ female walked into the clinic and spoke about her 2 month old baby who was ill.  She had left the baby at home as she didn’t have the strength to carry her baby the 30 minute walk.  We sent a car home for the baby and once seen, it was determined the baby had malaria.  She was treated and they were driven back home.  But the saddest part is that her husband drank all the money and she had the baby had no food.  We were told that if she reported him, the authorities would tell him to feed his family or go to jail.  It is the age old problem: if she tells on him, he will run away and/or beat her.  When we see the hungry, there is little we can do.  Yesterday, two people, when describing their medical symptoms, stated “I fall down when I am hungry; I get can’t walk when I am hungry”.