Skip to content
This is a special day.  Aggrey arranged for a 14 person van to pick us up from St Anna’s and to take us to Leo Chemist to meet an old friend and to pick up our medication.  48 boxes of medication was waiting for us.  This is where all the donations go….it is better than gold to the sick.  The van was packed to the roof with 44 of the boxes and Johnstone, a trusted community worker, accompanied the driver with the boxes to Kakamega.  This is truly the start of our mission.  Naturally, the driver of the van tried to renegotiate the fee as we had “overloaded” the van.  He managed to squeeze a little more from Aggrey, as was to be expected, then off down the highway.
Sara Otemo, who has worked with us for the past four years, met us outside the Kisumu District Hospital, and arranged to give us a tour.  We told security that we were nurses from Canada and we there as Sara’s visitors.  Jane, who worked with us two years ago, assisted with the tour as Sara was working Saturday afternoon.
Touring the hospital was like two worlds had collided.  We had stepped back in time to a mixture of 21st century then losing decades of time.  The hospital has a 300 bed capacity but occupation increasing according to how many are sharing a bed, and two to a bed was not uncommon.  The beds or cots were 18 to 24 inches apart.  One nurse and a student worked in the ICU ward and cared for 5 patients.  The ICU ward had four cardiac monitors but only one worked.  Equipment is purchased or donated to the units but when it breaks, there is no one to do repairs.  In addition, they only had one working respirator. A young male patient, in pre-cardiac arrest, had no IV and no monitor. It was shocking for our Canadian nurses to see this.  Yet the nurses are still very caring as they work in an impossible environment.
Sara worked in gyny and she was the sole nurse for 32 patients.  Maternity delivers 28 babies in 24 hours (give or take),with only 2 nurses working as mid-wives.  In Sara’s ward, we visited a young girl who had had a “criminal abortion”.  This young woman came into hospital in a coma.  Sara called her “a walking dead person”.  In Kenya, abortion is illegal.  The girl in hospital could be put in jail for her actions.  These desperate girls come in after their abortions and Sara removes the left over tissue and stops the bleeding.  There is little to no time to deal with the other patients.  The patients have few expectations.
We also visited the preemies in their incubators.  Other than the incubator, these babies have little in specialized care.  They either survive or they don’t.  As we moved from this area, to the infants who were over 1 kg, we gave baby clothes to a mother who was there with her baby.  “God Bless you”, she said and that isn’t just to us who delivered the clothing to the children.  Her blessing is to all who have donated to allow us to come so far.  Two abandoned or orphaned babies, one found in a latrine, lay on their beds with not even a diaper.  They were covered with a hospital blanket.  We left clothing for these children.  They will at least have something to call their own and to cover themselves.  We toured other areas of the hospital including the cancer clinic.  The drugs are donated by a German company.
In this hospital, the patients family are expected to wash their clothing (it is done in the hospital yard) and feed and care for them.  Food is provided for their meals, not like the hospital in MBene we visited last year.
We squeezed ourselves into Aggrey’s car and were driven to our home base in Kakamega.  It should have been an hour’s drive but we caught up the president of Kenya’s entourage…seven Landrovers.  Every few kilometres, his vehicle stopped and he spoke to the people who crowded the roads making it impossible for us to continue.  “Power to the people”, the crowds yelled.  When we were about 500 metres from our destination, we had a flat tire (and I mean flat).  By then, of course, it was raining and I mean raining.  The luggage had to come out of the trunk; the spare tire had to be removed; and the tire replaced.  Oh, where was CAA!!!
I won’t bother to tell you about slopping through the rain and getting soaked as we checked in.  The good news is that we are here; our medication is here (most of it anyway); and the rest of the nurses have arrived safely in Nairobi.
Talk to you soon…
Trish, Lynn, Gail and Dawn 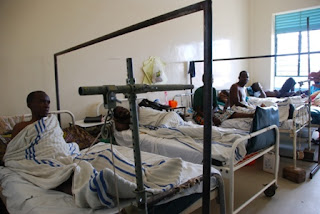 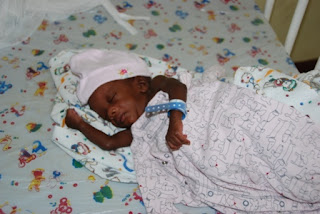 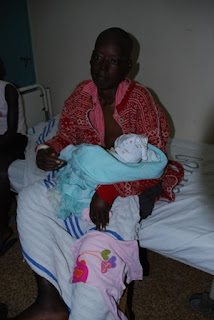