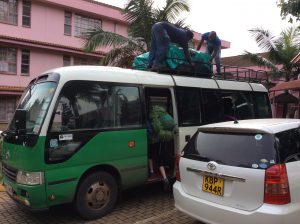 Jambo! The day has officially arrived, we’ve touched down in Kenya. All 11 of us and what feels like 1200lbs of supplies that we’re thankful for having the muscles of Jerry and big John to load into the bus. For a few minutes I didn’t think we’d be allowed on the plane with the overweight luggage we had to spread amongst bags as quickly as possible while the angry TSA lady yelled at us to move out of the way. Not to mention Gail getting pulled aside and questioned in Nairobi and having to bargain with airport security about a price to pay for the supplies we were bringing through customs. But we couldn’t be more thankful for all of the donations we’ve received to bring along and make this mission possible.

After 14 hours of flight time and 11 hours in a bus, I think it’s safe to say we’re all exhausted and to quote Laura with how some of us might be feeling, “in ten hours I’ll have my nighty on and I’m calling it a night.”

In between zebra and baboon sightings and a stop to see the Rift Valley on the long drive from Nairobi to Kakamega, everyone took a little nap, some even with their mouths wide open catching flies. I’m so tired that I’m still laughing at Meaghan getting hit on through the window by a man selling food and Lynn yelling “no thanks, I’d rather not nibble on a beet right now.”

The anticipation and excitement for the next two weeks is high. Stay tuned for updates as tomorrow we head to Kisumu to pick up our medications from the local chemist. 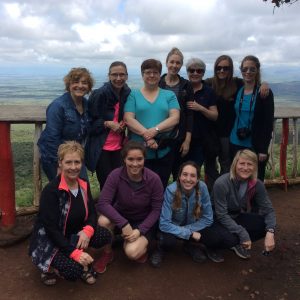 Anything can help. No Donation is too small.