Skip to content
It is hard to believe that we have arrived once more in Africa to start our medical mission of 2012.  The flight from Canada was long, 15 hours in the air plus stops in Brussels and Bujumbura, which is in Burunda.  We were met by Jerri Mulamba, Aggrey’s nephew.  He hasworked with us previously and  we would be quite lost without him. Our advance group of four overnighted in Nairobi at the Rosa Mystica, a guest house run by the Franciscan order of nuns.
Sisters Pacifica and Margaret met us for breakfast and impressed us with their calm and gentle ways.  I always feel so hyper when speaking with them.  We left Nairobi around 9a and arrived in Kisumu about 6:00 pm.  As the main road was in poor condition, we travelled an alternate route which ran through the Rift Valley.  We were only about an hour out of Nairobi when we were pulled over by two police officers, a male and a female.  To state the female officer was on a power trip is to underestimate.  Jerri and our driver got out of the vehicle.  The female officer stuck her head in the window and asked where we were going.  Trish replied, “Kisumu”, and the officer stated with glee “We are arresting your driver”.  It turned out the insurance on the van we had rented was expiring in 3 days and the new certificate was not yet available. After several phone calls, the problem was rectified and we were on our way once more.  At one point, we discussed which one of us would have to drive the van. We were stopped at least two more times before we attached our banner to the front of the van.  I believe we were only stopped once after that. The police are very poorly paid and will stop drivers looking for bribes.  They are more reluctant to ask foreigner especially aid workers.  Naturally, the rope broke twice as we drove and the banner flew up and stuck on the windshield.  Stop, fix the banner, drive, get stopped by the police, stop, fix the banner, swerve to miss pot holes…I am sure you are getting the idea.
The Rift Valley is a beautiful place and is primarily occupied by the Masai people.  They are herders and care for cattle, sheep and goats. We saw a large number of both Masai and animals as we drove.
In contrast to those making a living in agriculture such as the Masai and others hoeing their small lots and the roadside ditches, small businesses of every kind are set up beside the road.  People use their ingenuity to make a living.  As an example, we saw one man selling used and mismatched hub caps; others selling dirt which has been dug from the area, and others sitting near the road and selling small piles of vegetables, cabbages, potatoes, tomatoes, etc.  They stand out in the rain, work in the mud and, of course, endure the heat when the rains stop.  They do what has to be done to feed themselves and those at home.
The countryside is very lush as the rains have been abundant this year, very very abundant.  Soil from the ditches covered the roads in places making one side of the road impassable.  We saw two workers out with spades moving the soil.  I am sure they will still be there when we return in May.  We also saw two large trucks, which had slammed into the ditch for no apparent reason.  Jerri told us the truck drivers drive three days with little to no sleep as they have to meet their targets in order to get paid. They simply fall asleep at the wheel.
A large Masai ceremony is scheduled this week where male Masai teenagers enter into manhood.  The young men come from all over, with 2000 expected this year.  They have to kill a lion to prove their manhood (in these days, the killing of lions is limited to one or two), and one or two of the young men will be maimed or killed as they prepare for the rites.  Foreign visitors and the local people come to watch.  There is a huge celebration afterwards.
It is interesting to observe how people interact with each other in Africa.  If you are lost, you simply ask someone for help and you receive all kinds of directions, mostly wrong, but given with no sense of personal inconvenience.  As we pounded along the rough roads, the roof racks on the top of our van came loose.  It soon became apparent that pounding the racks with a rock was futile.  We drove a little further with the rock repair but when the racks fell off the van and hung by a bolt, we knew we needed help.  As we were using a temporary road,we stopped a road construction crew, and they assisted as best they could.  A large truck coming towards us stopped willingly when Jerri flagged it down and they gave us a pair of vise grips.  We managed to get the roof racks attached to the point, they were no longer hanging.  There is a repair in our near future before the van will return to Nairobi to pick up the rest of our group, eight more nurses.
The rains hit us hard as we approached Kisumu and the roads were deepwith water.  We tried to get gas but everyone with a motorcycle and on foot were standing under the overhangs.  We finally left without the gas.  Kenyans are much more patient than Canadians.  Everything stops until the rain lets up then it is business as usual.
We are spending the night at another former convent, St Anna.  It will be nice to be able to have a meal, a shower and try to get past our jet lag.  Talk to you soon,
Dawn 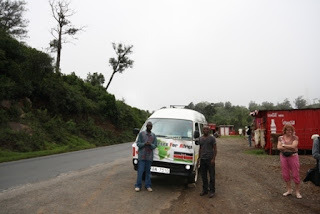