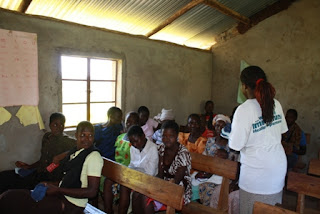 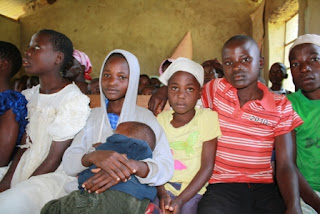 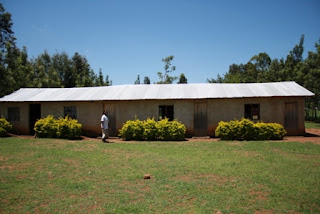 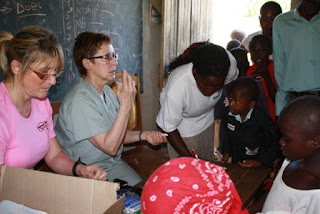 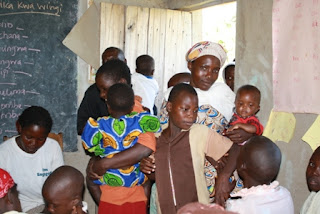 May 1, 2011
Kuku Hut
What an amazing exciting day today!  We went to a small village called Kuku Hut which actually means chicken hut in Swahili where we met an incredible young lady from Ottawa named Stacey who lives in a mud hut with a Kenyan woman named Rose to work with the village people.    Stacey is considered like a man in this village so when she meets to plan projects , she discusses them with the man while his wife works in the kitchen preparing the food, they eat and IF there are leftovers the wife may eat after.  Rose is an unusually strong independent Kenyan woman, unmarried at 32 and refusing to take a husband as she does not want to be a second wife (polygamy is common here).  She also mentioned anger at the injustice of the workload of women compared to men.  Stacey described how Rose would get male volunteers (white men of course) to carry the water for her and the Kenyan men would laugh at them!  Good for Rose!!  Stacey and Rose introduced us to the school, Tumaini Academy, which means “hope”.    Gail, Dawn and I dewormed 81 children who did not enjoy the taste of the medication so we had many dirty looks and crying babies!  The Head teacher, Lucille, gathered girls for a class on puberty, sexual health, birth control, STI/HIV prevention and condom demonstration (with Woody of course!).  Dawn did a great job of holding up the reproductive system posters!  The girls were shy but Rose was a great example by asking questions and participating in the condom demonstration.  Rose and I led a discussion with 4 men on HIV prevention, faithfulness to partners and condom use.  We also talked to key community members including the church Pastor about their HIV campaign.  He agreed that preaching about HIV prevention from the pulpit is a strong message as these people are very religious and value the authority figure of the pastor.  Once again, a truly inspiring day!
Gotta go – our computer is dying as we have no electricity, going to have another cold shower!
From Lynn