Our first mission took place in a large church owned and operated by the Salvation Army.  It was near 3 schools and a village named Ikobero.  We arrived slightly late as our driver and helpers were late coming from breakfast.  We will soon have them as hyperactive as all Canadians tend to be.  Our trip was uneventful and no vehicle breakdowns along the way.  It is funny how one starts to appreciate the things were generally take for granted,

We treated 587 patients in the clinic itself, dewormed two schools and a third, who sent all their high school girls into the clinic for treatment.  It was a sea of blue uniforms for quite awhile until we managed to get them into an area for deworming.  We dressed the usual wounds and treated the other patients for respitory ailments, malaria, fevers, etc.  It is spring here and the mosquito population is as bad as I have seen it.  We all use mosquito nets but they still manage to squeeze in through somehow.  Maybe they start with the floor and work their way up from the bottom.  There is nothing like the sound of a mosquito to make you move in the night!

A Jiggers clinic was held also.  Thirty persons were treated with 20 from a nearby school.  Four months ago, Johnstone treated 150 children in the school and this time, he treated only 20.  The children are now for the most part wearing shoes.  It is amazing what one treatment and education about the disease can do.

Around noon, a heavy rain hit the area and everyone waiting outside came inside.  Between the noise of the patients and the sounds of the heavy rain on the tin roof, it was deafening.  Later in the day, chickens ran around inside the church.  After missing lunch, they started to look pretty appetizing.

One of the photos tonight is of a 5 year old boy whose mother had left the area.  He lived with his father, who worked during the day.  The child was cared for by anyone who had taken an interest in him.  A neighbour spoke for him later on in the clinic but he arrived alone and registered himself.  He burnt his hand cooking!

Will tell more tomorrow and will have photos of some of the team, 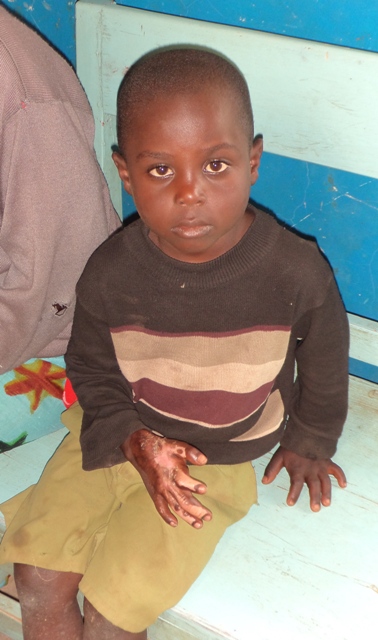 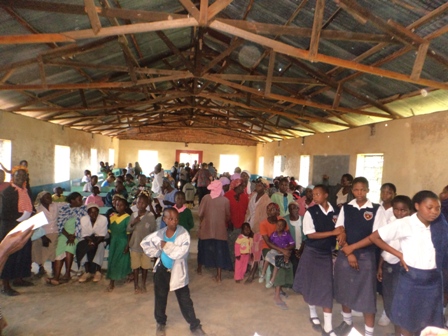 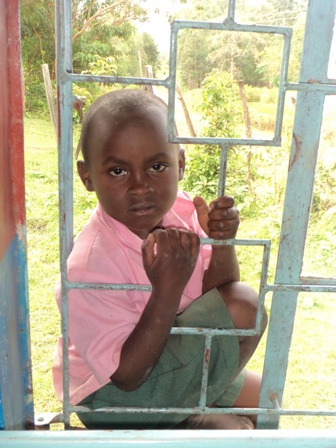