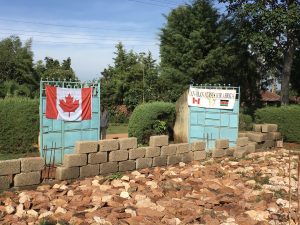 It doesn’t seem real to me that the end can already be upon us. I feel like I blinked and this mission was already on its final moments. It was a very bittersweet day, knowing that everything was coming to an end but also trying to relish in the last day and reflect on how grateful I felt being a part of this unique experience.

We had a riot prior to the clinic even opening, due to some people cutting in line. All of a sudden there was yelling, pushing and people going crazy. Thankfully, even though our fearless leader Gail is tiny, she is equally as mighty. She was able to settle the line and calm the crowd, with the promise that everyone would be seen but needed to wait their turn.

We had a patient show up asking for us to help him because “his mammy was very sick and could not make it to the clinic even though she lives just down the way”. I was able to have the opportunity to do a home visit. Not knowing really what to expect, I gathered a thermometer and blood pressure cuff and our trusty Kenyan nurse Victor, and headed to the home. We found a lady lying on a mattress, moving independently, that the son stated could not move at all. He said she had a fall and since then had not been moving for the last 4 months. She had a worker that assisted her in toileting, and that was all. The lady was able to move herself around the bed, her vitals were all stable and she had good grip strengths and no other health concerns. I headed back to the clinic to speak to the clinical officer and have medication ordered, and then brought back to the house with education.

We had a couple of minor hiccups throughout the day that we trouble shooted (aka a torrential downpour with mass hysteria and people swarming in every direction into the church), but for the most part it went without a hitch. We managed to see 644 patients, and closed the clinic early because we had seen everyone (and also had run out of meds).

As much as clinic days were exhausting, we became a little hardworking family. The drivers, the clinical officers, Kenyan nurses, Solomon, Johnstone and his jiggers workers, as well as all the people who coordinated the flow and set up of the churches each day all played a huge roll in making these CNFA clinics highly successful. Without the hardwork and dedication of all these people, the clinics would not run as easily as they did.

In 11 days, we saw a total of 7,167 people come through the clinics. That is not counting the home visits, jiggers treatments, school deworming and other people we saw that were not officially registered. I don’t know about you, but I think we truly are rockstars.