Skip to content
Today started with a smile.  Lynn woke everyone up but couldn’t seem to get Trish to respond.  After repeated pounding at her door, I said I would continue the effort in a few minutes. After considerable pounding and calling her name, I didn’t have any response either until Trish opened her door which was down the hall.  The poor Belgium man in room 2 was certainly awake though.
We had an exciting day today.  We drove to Bondo to visit a medical clinic and an orphanage run by the Francisican sisters (the owners of the Rosa Mystica and St Annas).  The proceeds of both guest houses go to operate their various clinics and orphanges.  We met up with Sister Beatrice at a gas station in Bondo and she directed our travel along some bumpy dirt roads to the clinic, only about 13 kms from Bondo.  This Sister is a trained RN and she impressed us with her knowledge.  The clinic, which is open 24 hours, treats approximately 50 people a day.  The patients pay about 30 shillings for their care, which is less than the treatment is worth.  We were impressed with the quality of care and the careful medical treatment the patients receive.  They have two small wards with four beds in each, male and female.  Patients can stay one to two days.  Two patients were in the female ward: a woman who had recently given birth and a pregnant female who had malaria.  The latter was on an IV drip.  The clinic included a small lab with a lab assistant and a separate area for AIDS counselling and testing.  Teaching nutrition and good health practices is a daily process for the patients.
In contrast to the medical clinic was the orphanage also run by the sisters.  Currently, the orphanage has 43 children, whose mothers have died in childbirth, along with babies who have been abandoned by their families.  The children, who have families, are kept for three years then are reintegrated into their natural families.  During the three years, families are reminded that the children will be coming home.  Going home isn’t  alwayssuccessful.  Sister Josephine related a story of how a little girl from the orphanage quit speaking when she went back to her family.  She didn’t resume speaking until she was returned to the orphanage.  We heard other stories of how the children went back to their home and died, due to neglect or ignorance of the child’s needs.After 3 years old, abandoned children are sent to an SOS orphanage.
While we were speaking with Sister Josephine, the head of the orphanage, 2 children, two and three years old, came into her office.  We gave them teddy bears and they went to each of us and shook hands.  As I was the whitest one of the bunch, the children stayed by my side with the smallest one climbing onto my lap.  They would continually press against me to obtain that human touch that we all need for life.  The youngest then peed on my lap, for good luck I think.  It was worth it.  The infants are kept together until they are 10 months old then are put into family rooms.  According to Sister, this gives the children a sense of belonging.  These rooms are attended by two persons 24 hours a day.  The caregivers sleep in the same room in bunk beds and are paid 100 shillings a day, about $1.50.  The children are fed porridge twice a day with the smaller ones receiving milk twice a day.  The convent is self-supporting for milk, eggs, and chickens.
The Sisters gave us tea and a fried pancake, which we ate as not to waste food.  Sister Beatrice then graciously invited us for lunch at the mother house, which was 50 feet from the orphanage.  We then ate again: chicken, rice, beef, green vegetables and fruit.  They were so gracious to us and asked us again and again to return.
We ended the day back in Kisumu visiting APDK, an organization which assisted us in providing 4 badly needed wheelchairs last year.  It has been an interesting day to say the least and sad at times.  Kiss your loved ones and be grateful for the country we were born in.  Talk to you soon, Dawn 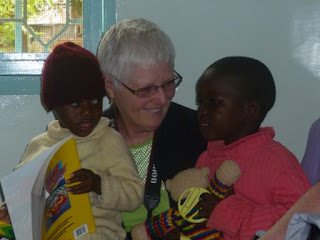 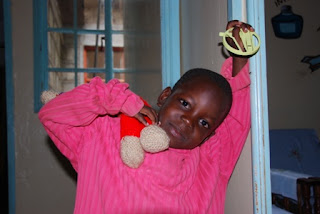