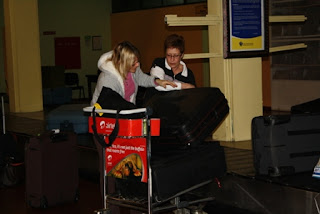 Today is… what day is it?  Gail, Lynn and Dawn left two days ahead of the rest of the nurses this year to get the medications picked up and ready for our first clinic on Monday.  Actually, I really do know what day it is.  It is Thursday April 28th, very soon to be Friday April 29th.  Our trip to Nairobi was uneventful but tiring.  We have advanced 7 hours in the last 24 hours and thousands of kilometres.  We arrived at the Rosa Mystica, a St Benedictine convent, which has been converted into a small hotel.  The rooms look and feel very much like the convent cells they once were but are very clean.  All I want is a place to lie down and stretch out.  I am in the same room I had last year when we were leaving and guess what, there still isn’t any hot water for the shower.  After travelling for two days, a hot shower would have been nice but what the hey.  And just so you know, my two travelling partners who “never, ever sleep on a plane” gave a bad imitation of being awake.
Aggrey’s cousin and his nephew arranged for two cars to pick us up, one for people and one for the luggage. The traffic getting out of the Nairobi airport was horrific.  Kenyans for the most part are patient drivers, although the two or three vehicles that dodged around us on the road to the Rosa Mystica.  On one occasion, we detoured around a log filled with long and vicious looking spikes which lay on ½ of the road.  According to our driver, it is used to capture highjackers who take over public vehicles, such as small transport buses.  I wasn’t sure why if we could drive around it, why the highjackers couldn’t do the same.  I also learned that it is ok not to stop for red lights at night because there is no one around. The third thing I learned about driving in Kenya is that the drivers try to disprove the law of physics that says two objects can not occupy the same space at the same time.  We are safe and happy to be here.  Tomorrow we are on our way to Kisumu.