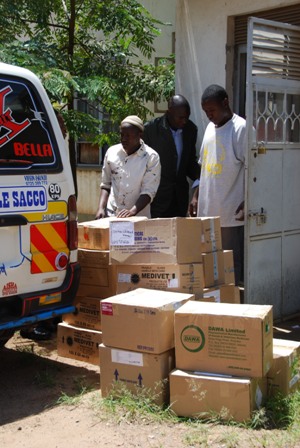 Saturday April 30, 2011
Time has a different context in Kenya. This is an adjustment for Canadian women whose work and social lives are ruled by the clock.  The receptionist at St Anna’s slowly and carefully wrote out all of the receipts by hand using carbon paper to provide a copy.  I didn’t even know one could purchase carbon paper anymore.  Our transportation to the Kisumu pharmacy was two hours late in arriving but the pharmacist, who generally closes on a Saturday, said “I knew you would come so I kept the shop open”.  My type A personality keeps getting in the way.
We have had an interesting day.  We hired a local shuttle bus to drive us from Kisumu (the second largest city in Kenya) to Kakamega, about a 60 to 70 minute drive.  The bus generally transports passengers and is one of the local buses that are so abundant here.  Although the seats were worn through, the drive was uneventful as the road has improved significantly since last year.  There is only one section that still has to be redone.  The bus carried the three of us, plus Johnston, a community worker who assisted us today, and Sara, one of our nurses.  In addition to us, there was the driver, a helper, 25 boxes of medication and six very large heavy suitcases containing our supplies and personal items.  This 14 passenger bus was groaning at the seams.
Once we arrived in Kakamega and sorted out our rooms, we walked to a local market to buy some rope to hang our banner.  Sara stayed with us and assisted us with our purchase.  As we walked we came across a small girl about 3 years old accompanied by an older woman.  Gail took a picture of the child and the old woman started to talk to Sara.  She asked Sara if Gail would take another picture of the child, which she did.  At this point, we realized the old lady (who was only 60) had elephantitis in both feet.  She told us the child had been abandoned at birth; she had found her; and she was raising her. What would you or I have done? I was quite shaken by the story and we managed to slip her some money.  The market was full of people and we had to be careful that we weren’t mobbed by others wanting money.
We spent the day talking to a lot of people about circumstances in this country, too many stories and too depressing to mention here.  The need is great.  On May 7 (thanks to prompting from Gail of Canadian Nurses for Africa), an NGO is sponsoring a jigger program.  Jiggers are parasites that get under the nails on your hands and feet.  Over 1000 people are expected to come for treatment.  If we are working in the area, we hope to be able to have someone attend the clinic. And that is a happy story.