Another sunny and hot day in Kenya…I see from photos that North Bay has snow…brrr.  We showed the pictures to our Kenyan staff and the general consensus was that it is better here, weatherwise, anyway.  68 is considered very cold.

We had another shaky start to our clinic.  We left on time (with Sylvia) and didn’t even get out of town when the clutch on our matatu went.  Jerri flagged down a commercial matatu on the street filled with passengers and the driver returned about 5 to 6 minutes later ready to transport us to our clinic.  As it was a smaller vehicle, we cuddled up to our medication and each other and valiantly bouncedover the same old rough roads to Kedohi.  When we arrived, the patients were lined up outside the clinic waiting and somewhat agitated.  Yesterday, we were forced to shut the clinic earlier as we ran out of medication.  I believe they were fearful that wouldn’t all be seen.  We started with a prayer and went right to work.

Today, we treated 843 patients and unfortunately, I don’t have any other numbers for you.  I believe the schools had already been treated for worms, which was a good thing, as it was all hand on deck.  A jiggers clinic went on nearby.  We had a mom and 4 children with jiggers attend the clinic.  The shame of having jiggers is so great that she couldn’t speak.  After trying several times to communicate with her, we provided transportation to treatment.

There was an incident this morning that took everyone aback.  One of the Kenyan volunteers was registering patients and suddenly became aware that her cell phone was missing.  She had someone call her number and was able to track down the thief, who was still in the clinic.  You should have heard the shouting and the grandmother,who had 2 children, was removed from the premises.  The crowd outside was furious and they started to slap her.  This was grassroots community punishment.  I believe they felt she also brought shame on the community by her action.  We were stunned but this was one of the times when you have to respect local culture. 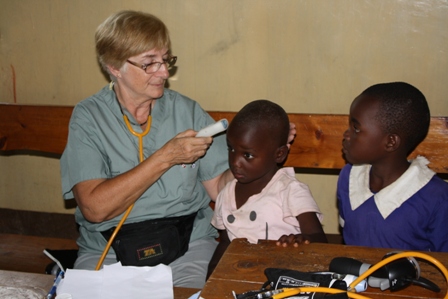 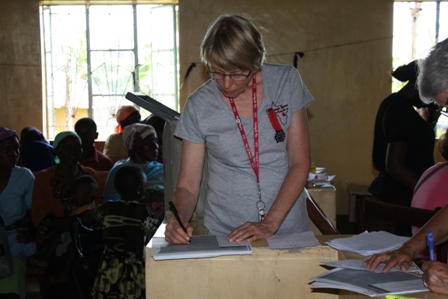 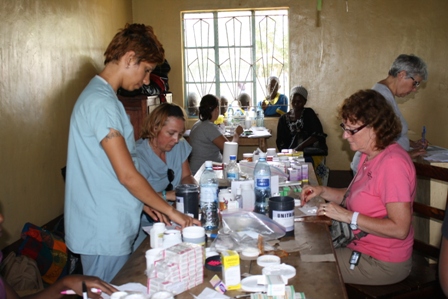 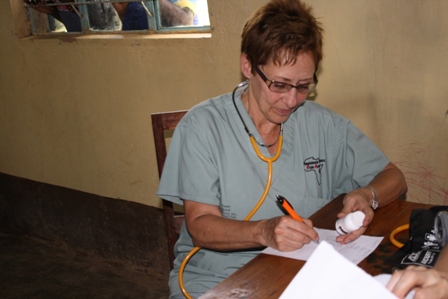 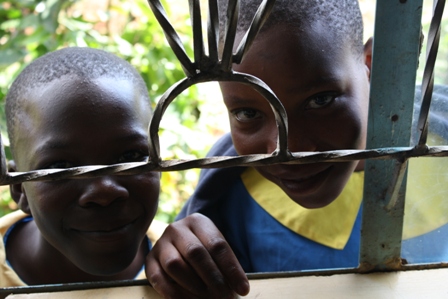 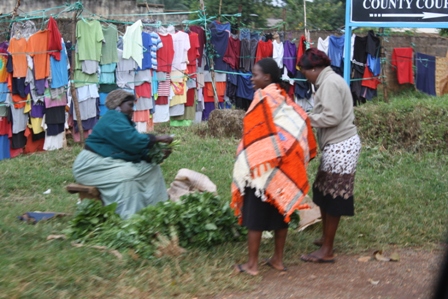 It was 41 degrees in the clinic today with the threat of rain but no relief.  Those of us who were at this clinic 2 years ago recognized it as the place where we walked out as we were too scared to get back on the bus due to muddy roads.  The road hasn’t changed except that it is a little more experienced.  Sharp rocks protrude in several places…no wonder we have vehicle problems.

Today was Lynn’s birthday so we celebrated with a cake and a unique candle.  It is always good to come together at the end of the day and discuss what happened at clinic.  We listen intently as each speaks and we also laugh a lot.  So to everyone that loves us, we are fine and are starting to think of home as we approach the last two days.

Thanks for following us day to day,