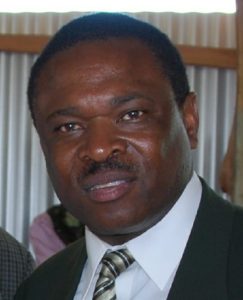 Dr. Aggrey Mulamba was born September 6, 1961 in Kenya. A brilliant man, he never stopped his pursuit of higher learning. After moving to Canada in 1999 he earned a Diploma in Mass Communications at the Conway School of Broadcasting. Later, he obtained a Diploma in Nursing, followed by a Bachelor’s Degree, Masters and ultimately PHD in Christian Counselling. Aggrey was also extremely passionate about helping the underprivileged in his home country and established the Bethany Mercy Ministry Orphanage in 2006, which catered to orphans, widows and widowers affected by HIV/AIDS. He will be fondly remembered for his compassion and dedication to the people of Kakamega and Vihiga, Kenya. Aggrey was blessed with a beautiful wife, Margaret, five children: Jean, Eugene, Sharon, Maureen and Ian, and his grandson Ares Mulamba, with whom he had a very special bond.

The untimely and unexpected death of Aggrey Mulamba in June 2018 was a shock, not only for his family, but also for all of his CNFA family and community back home in Kenya. I first met Aggrey in 2007 when, over a cup of coffee at Tim Hortons, he told me how he had brought his family to Canada. He showed me photos of his community in Kenya and spoke of the challenges facing them due to their lack of access to health care. He was brimming over with an infectious passion for his people and I found myself spontaneously asking “Is it possible to take a medical mission there to help them?”. The Aggrey who will always be close in my heart was the Aggrey who answered that question with his huge, joyous smile and a resounding ”Oh Yes!” That was the root from which CNFA has grown, with Aggrey being instrumental in paving our way in Kenya. He has left behind an incredible legacy, not only through his work with CNFA, but also through the impact he had on everyone he knew and helped. He will always be remembered, with love.

– Gail Wolters, Founder and President of Canadian Nurses for Africa