Skip to content
Ikobera, Monday April 30, 2012
We held our first clinic in a Salvation Army Church in the community of Ikobera.  The closest school to the church and our clinic was closed as the children are off school for the month of April and, depending on the school, until after May 1st which is always a long weekend.
Before I tell you about our day, let me tell you how Canadian Nurses for Africa started.  Gail Wolters and Aggrey Mulamba had a conversation in a Tim Horton’s one day and Gail said to Aggrey “have you ever thought about sending a medical mission to Kenya to help the people there”.  And so it was born.  Before we start this week, all of us have to thank both Gail and Aggrey for their hard and continuous work.  The planning for these two weeks started last May when we returned home.  So thank you to both of you.
The Salvation Army Church in Ikobera had a concrete floor but the concrete in the entrance had suffered considerable decay.  The registration tables were put up and balanced with delicacy due to the uneven floor.  We had to share our workspace with at least one chicken and her chicks.  There was a chicken sitting on eggs at one point.  I was too busy to notice if they were there at the end of the day or where they already someone’s dinner.
The community was waiting when we arrived and we began our clinic shortly after setting up tables and putting the medication behind the altar. The clinic began with a prayer led by Captain Sammuel (yes, 2 mms) and then the community sang some of the prayer.  It was very impressive in its simplicity and sincerity.
The clinic went very well thanks to the various community workers who helped with traffic control by manning the doors, and making sure the right people received their medication.  The day was certainly a learning curve for the new nurses on the trip. They did a great job and we treated 620 persons in the clinic and dewormed 600 children in a nearby field.  In addition, we took three persons to hospital.  A 40 year old woman was hospitalized due to malaria and typhoid (she would not have lived the day out without care); a 12 year old boy received x-rays for a leg bone infection, was referred to an orthopaedic surgeon, and will need surgery.  We anticipate we will have to assist him financially. Without surgery, he will lose his leg. The third patient, a 20 year old female collapsed, was sent to hospital, was treated, and released.  On the way home, we discussed what would happen to each of these people if we hadn’t been there today.  We saved the older woman’s life and kept the child from having to live in a harsh country with only one leg.  Families have to choose between feeding the whole family or providing medical care for one child. One of our nurses told a story today of three children in one family: the 5 year old was healthy; the baby weighed over 20 pounds; and the 3 year old girl weighed less than 20 pounds.  Who gets to live and who gets to die?
I spent some time in a car with a Kenyan driver today.  He told me that all of the Kenyan government was crooked and that one MP was as bad as the next.  The people elect a different person always with the hope that this time it will be different.  It never is.  It is small wonder that the children often don’t smile and there is a look of hopelessness in their eyes.  The driver said the new road from Nairobi to Kakamega that was finished last year is full of pot holes again (some look like fishing holes, no exaggeration).  The contractor deliberately did a poor job then gets hired back to repair the road. The people mean nothing to the government except at election time.  He stated that what we do is “good”.  The poor have to receive it directly from the donor or it ends up in someone else’s pocket.
We saw children caring for children again today.  AIDS infection is rising in Africa and so many of the children are orphaned and are cared for by grandparents.  The small children are carried on the backs of the older children.  I literally gasped at the age of one carrier today, but I was unable to get a photo to show you.
Tomorrow we go to Badaywa.  Oh, I nearly forgot.  On the way home, we ran out of gas!!!  Fortunately, we were close to a station and Jerri obtained a container of gas for us.  Note to driver…keep the tank full!
Talk to you soon,
Dawn 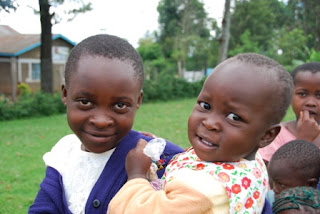 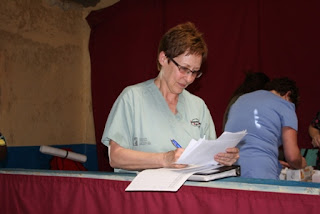 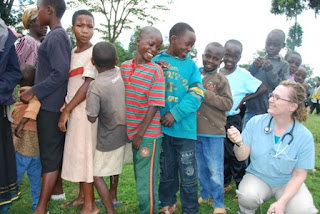 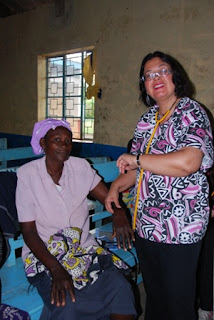